GALT is charging an adoption fee of $1,250 for Irish retired racing greyhounds 7 years and younger and $1150 for those 8 and over.

The Irish greyhounds arrive to us spayed or neutered with current rabies vaccinations. The transportation cost averages $1,620 per dog, and GALT spends another approximately $400 for CBC blood work with heartworm test, Protatek testing, dental and vaccinations required for this environment.

At this time, Ireland is the current source for retired racing greyhounds. Southland track in West Memphis, AR is ceasing racing December 31, 2022. After that time there will be only 2 tracks left in West Virginia. All of those retired racers will go to adoption groups on the east coast.

For its almost 22 years in existence, GALT has operated as a 501 (c) 3 Corporation. The Irish retired racers’ adoption fee correlates to this policy.

​TC, aka Teacup, is a 2 year old white and black male born on September 13, 2020. He is brother to GALT’s Dreamer and is from Ireland. TC gets along with medium to large sized dogs but not small ones. He is undergoing medical evaluation and needs to be evaluated for cat tolerance.

TC flew a long way to get here and has adjusted quite nicely. It took him a little bit to settle down the first night in our foster home. He was so excited getting to sniff all the new things, run outside, and get to know his big greyhound foster brother.
After patrolling the house and making sure everything was safe, he finally decided to lay in his dog bed but with one eye open, he didn’t want to miss anything! As we have gotten to know him and he has become more comfortable he has blossomed into the sweetest guy.
TC tends to like humans better than other dogs. He doesn’t seem to mind other dogs though I think he can take them or leave them. He is more interested in people and if they want to scratch his head or give his extra soft fur a pet. He is very well behaved and only needed a couple days of crate training before we were able to leave the house and let him roam. He can be interested in things like pillows or shoes but he isn’t destructive. I think he grabs them thinking that he is being helpful and wanting to show you what he can do. He understands no and responds well but those eyes are hard to resist and no one can be upset with him for too long.
He sleeps through the night on a dog bed in our room, he rides wonderfully in the car, he walks well on a leash and sometimes needs a little affirmation if he gets nervous. Sometimes he just wants to be by your side to make sure everything is ok. He eats his dog food well and oddly doesn’t seem to want to chew or eat treats even though he likes the idea of getting them.
TC is pretty quiet and rarely barks, he gets excited when we come home and greets us with a smile and happy tail, and he enjoys dispersing his dog toys into the other rooms of the house. He lets us know when he wants to go outside, He doesn’t get on the furniture or jump on people. When someone comes to visit he has excellent manners and calmly stands there while wanting to be pet. He sleeps a lot throughout the day and has a few spurts of energy where he needs to run around outside or shake and toss a dog toy.
TC is a bit shy at first and once he gets to know you, he is full of love and energy. He gets along great with medium to large breed dogs but does not like small dogs. He would be best suited to a home with older kids (12+). He is a handsome young lad and you will surely have the luck of the Irish if TC finds his forever home with you!
TC's Foster Family 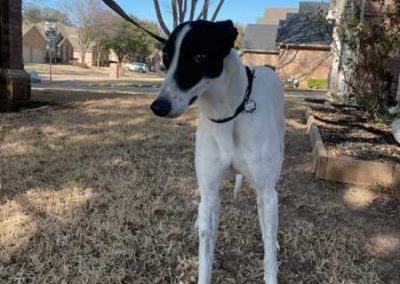 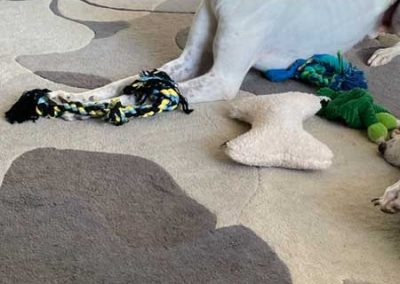