Watson is an approximately 6 year old brindle male. He was found as a stray in Norman, Oklahoma. Watson is fine with small dogs and kids. He will be tested for cat tolerance soon. Watson is currently undergoing treatment for ehrlichia.

If you are looking for a chivalrous, Will Rogers type who never met a stranger, Watson is your hound.

He’s a big, heavy-boned, heavily muscled hound with a dense brindle coat that varies from brilliant orange to a soft cream color. He has a white face and dark brown eyes that always seem to be looking at his human, anticipating their next wish. Despite his size, he is easy to manage. He has terrific leash manners and walks calmly at my side. To guide him around the house, all I have to do is place a light hand on his neck, and he walks alongside. He wants to be close at all times. In fact, he accompanies me everywhere in the house.

Watson has a gentle, kind spirit that really shines through with the other dogs in my pack. He’s easy-going with my small and medium-size dogs, allowing both of them to climb on him, lick his face and try to clean his teeth. He doesn’t care if they snuggle up to him in sleep. He has great battles in his dreams where he barks, growls and chases varmints, but he does not sleep startle. He’s deferential to the other two greyhounds in the house and joins them to patrol the yard for squirrels. He passed his child-safe test with a family who visited my home recently. Watson does not bark, even when the yappy members of my household are sounding off. Watson enjoys sleeping in crates and absolutely refuses to be crated against his will. But that’s OK because of his great house manners, he’s earned the right to be crate-free.

He likes to chase balls (though you’ll have to do the fetching yourself), enjoys squeaky toys and loves walks. He loves to be brushed with a soft Kong grooming tool. By far, his most favorite activity is naps on a lap. Yes, he is a big boy, and in his big ol heart, he is lap dog. He’s recently discovered how much fun it is to do guy things, such as assisting the appliance repair dude or the handyman. He’s friendly and welcoming to strangers.

Watson would like to have a family who is around a lot and can give this retired coyote hunter lots of company and affection. Cool tile floors would be a bonus (he prefers them to dog beds about 50% of the time). He’s suitable for any age group because of his kind, gentle spirit, and comfort with children. He is child safe, and small- and medium-dog safe. 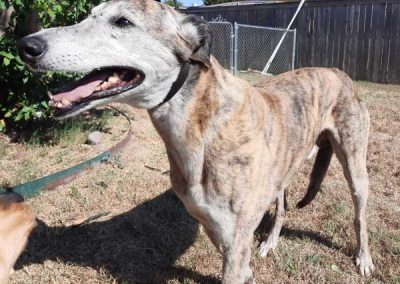 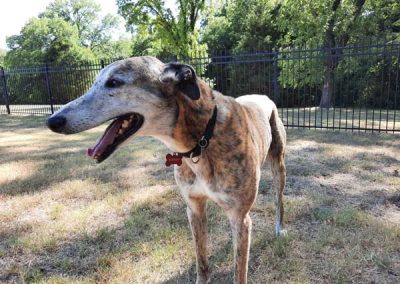 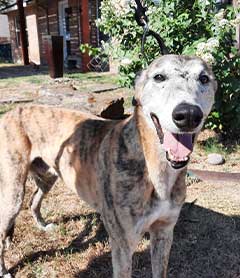