Tucker is an estimated 2 1/2 year old blue and white male born in 2019. He was listed for sale by his owner, and now he is in GALT’s care. His transporters reported that he is a very sweet boy. Tucker is cat tolerant.

Someone’s going to get lucky when they adopt this incredibly handsome 2.5-year-old boy! His coloring, white ticked with blue patches, is very unusual. A bit of an old soul for a young dog, Tucker is very calm, laid back, and well-behaved. He sits and clearly understands what “no” means. He’s a great eater, not at all picky, he’s fully housebroken and sleeps soundly through the night. He goes out in the yard to relieve himself and doesn’t like to be out for long before he comes right back in. Although he’s a love bug,Tucker is a bit shy and reserved in new situations and with strangers, and crowds make him a bit nervous. He’ll need an adopter with some patience and understanding to give him a bit of time to understand that he’s safe and everything’s okay and once he does, he’s a happy, easy-going boy.

Tucker loves toys though he’s too rough on stuffies so he has a Kong and plenty of bones to chew. He has mild separation anxiety that we’re working on. He panics in the crate so he cannot be crated. Since he’s a young, athletic boy he can easily jump over a baby gate. Tucker is not destructive and has full run of the house when we’re out. Given the opportunity, he will counter surf, so it’s best to keep counters clear when you’re not watching!

Tucker gets in and out of the car without assistance and he’s a perfect passenger. He loves his daily walks and will pull a bit if he gets startled or wants to head home. Walking him with a harness solves the problem. He’s a sensitive boy who gives the gentlest kisses in exchange for pets and ear scritiches. Loud noises can sometimes briefly startle him and he recovers quickly once he realizes there is no threat. However, the vacuum cleaner and the lawnmower are his arch enemies and he will flee to another room to avoid them. The more Tuck is exposed to the ‘world’, the more he learns not to fear new experiences.

Tucker gets along with cats and dogs of various sizes. He can be a bit jealous when other animals in the house are getting attention. He has too much interest in birds, so it’s best he does not live with them. 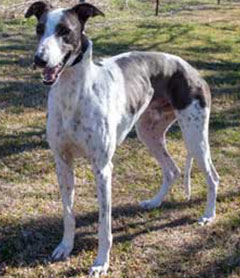